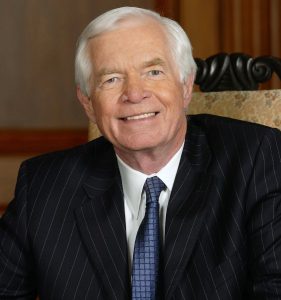 Dubbed the “Quiet Persuader” and now serving in his seventh term as United States Senator, Thad Cochran has been one of the most influential political figures in Mississippi in the last half century.

Born in Pontotoc in 1937 to two school teachers, his family eventually moved to Byram when Thad was in the fourth grade.  He graduated from the University of Mississippi in 1959, served in the U.S. Navy, and earned his law degree from Ole Miss in 1965.

In the mid-1960s, he started to gain an interest in Republican politics and was very involved in Richard Nixon’s campaign in Mississippi in 1968.  In 1972, he was elected to the U.S. House, where he served three terms.  In 1978, he ran to replace the retiring Senator Jim Eastland.  He was elected, and became the first Republican statewide elected officeholder in Mississippi in more than a century.  In a remarkably bipartisan move, Jim Eastland resigned a week early, allowing then Governor Cliff Finch to appoint Cochran to fill Eastland’s last week to give him a seniority advantage in the U.S. Senate.

Cochran served as the Vice Chair of the Senate Republican Conference from 1985 to 1991 and was subsequently its Chair from 1991 to 1996.

His service in the U.S. Senate would lead him to two committee chairmanships.  From 2003-2005, he served as the Chairman of Agriculture.  In 2005, when Hurricane Katrina hit, Cochran occupied the Chair of the Senate Appropriations Committee.  As a result of the leadership from Cochran, the rest of Mississippi’s D.C. delegation and Governor Haley Barbour, Mississippi was able to secure $29 billion in funding to help rebuild and recovery from the most destructive natural disaster in U.S. history.  Senator Cochran’s leadership, and more particularly his leadership style, was singled out as one of the driving forces behind gaining significant federal resources for recovery efforts in Mississippi and other states devastated during the 2005 hurricane season.  He again holds the Chair of the Senate Appropriations Committee in the current Congress.

Three legacy areas where Senator Cochran’s influence in Mississippi will be permanently felt are in agriculture, defense and research.  He has been a staunch promoter of rural economic development through support of agricultural and natural resource issues.  His influence in areas of defense funding is legendary and from military bases to shipbuilding operations, thousands of Mississippians are the beneficiary of his commitment to national security.  He was wielded enormous influence to have Mississippi State University designated to lead the FAA Center for Excellence for Unmanned Aircraft Systems.  His leadership has contributed to funding of other university-based research programs including energy, agriculture, and forestry facilities at Mississippi State University; the School of Polymers and High Performance Materials at the University of Southern Mississippi; the Natural Products Center, Water and Wetlands Center, and Food Service Management Institute at the University of Mississippi; the National Warmwater Aquaculture Research Center at Stoneville; and the Jackson Heart Study at Jackson State University and the University of Mississippi Medical Center.

Cochran has been awarded honorary degrees from Tougaloo College, Mississippi College, Blue Mountain College, Kentucky Wesleyan College, and the University of Richmond. He is a member of the Kennedy Center Board of Trustees and a Regent emeritus of the Board of Regents of the Smithsonian Institution.

As impressive as his personal and professional accomplishments are, there is a lasting legacy of those who have served on his staff who have become notable leaders in their own right including multiple university Presidents, elected officials and corporate executives.

Though politics during his public life has certainly taken a turn to point attention to showmen and those shouting the loudest, Thad’s style has not changed.  Hence his lasting reputation as the Quiet Persuader.