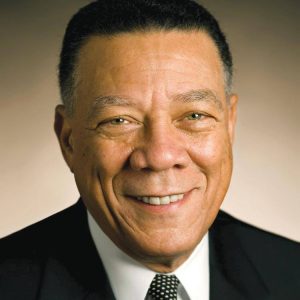 Being the first isn’t always easy, especially when you’re from Mississippi and when you’re black in a segregated South.  Yet, that’s why the Mississippi Top 50 is proud to name Reuben Anderson to our 2020 Hall of Fame.

Born in 1943 to a bricklayer and a great-grandson of slaves, Reuben Anderson’s Mississippi then wasn’t as welcoming of a place for African-Americans as it is today.  Still, young Reuben didn’t let that slow him down.

After graduating from Tougaloo College in 1965, Anderson became the first black student to graduate from the University of Mississippi’s School of Law in 1967 – 5 years after James Meredith integrated Ole Miss.

The pinnacle of his first came in 1985 when Mississippi Governor William Allain appointed Anderson to the State Supreme Court.

In 1991, Judge Anderson retired from the bench to return to private practice with Phelps Dunbar LLP.  But his firsts weren’t over quite yet.

In 2009, Anderson was inducted into the National Bar Association Hall of Fame and two years later into the University of Mississippi School of Law Hall of Fame.

Anderson has served as Chairman of the Mississippi Civil Rights Museum and was one of its major fundraisers during its development.

And when Mississippi needed someone to lead the Commission to put forward a new state flag, Judge Anderson was appointed by Lt. Governor Delbert Hosemann and named chairman by the Commissioners to guide the process. As the Flag Commission wrapped up its work recently, Anderson offered inspiring words that drove the Commission’s work home.

Judge Reuben Anderson’s life of firsts is truly an inspirational story, both for him and the State of Mississippi, and that is why we are proud to name him to the 2020 Mississippi Top 50 Hall of Fame.