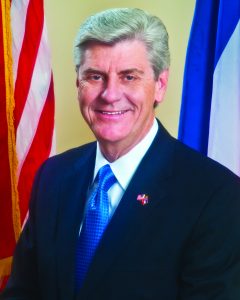 Phil Bryant is near the end of his second term as governor of Mississippi, and is currently presiding over the most prosperous era the state has ever known. His tenure is punctuated by historically low unemployment, improvements in education statewide, an unprecedented relationship with a sitting US President, and large economic development wins featuring companies such as Continental Tire, Toyota, Yokohama Tire and Amazon.

Phil Bryant was sworn in for his second term as Mississippi’s 64th governor on January 12, 2016. Before becoming the state’s chief executive, Bryant was lieutenant governor from 2008-2011. He also served as state auditor and represented his legislative district in the Mississippi House of Representatives for five years.

The son of Dewey C. and Estelle R. Bryant, a diesel mechanic and a mother who stayed home with her three boys, Bryant learned early the value of hard work and the importance of education. The Moorhead native earned an associate’s degree in criminal justice from Hinds Community College and completed his bachelor’s degree at the University of Southern Mississippi. He holds a master’s degree in political science from Mississippi College, and before assuming his role as governor, Bryant served as an adjunct professor of government there.

Gov. Bryant began his career as a deputy sheriff in Hinds County and later worked as an insurance investigator before being elected to the House of Representatives in 1991. In 1996, then Gov. Kirk Fordice appointed him state auditor, a position he was re-elected to in 1999 and 2003.

As governor, Phil Bryant has led Mississippi in implementing transformational public education reforms, promoting economic development and building a competitive business climate that attracts major employers. Under Gov. Bryant’s administration, over 35,000 jobs have been announced along with $7 billion in new corporate investments. He is also an avid outdoorsman and is a longtime member of the National Rifle Association’s Institute for Legislative Action.

Politically, like his predecessor Haley Barbour, he is in the process of casting a long shadow of leadership that will likely long outlast his tenure. In 2018 alone, Bryant appointed Cindy Hyde-Smith to succeed longtime Senator Thad Cochran. Bryant’s influence with President Donald Trump yielded two Presidential visits to Mississippi, and that seat was successfully defended in an atmosphere with national political implications. He then appointed state Rep. Andy Gipson to replace Hyde-Smith, and then Shad White as a replacement for Stacey Pickering as State Auditor. In recent weeks, he has also named a new state supreme court judge and a new state appeals court judge.

Gov. Bryant and his wife, First Lady of Mississippi Deborah Bryant, have two children and three grandchildren, and are active members of St. Marks United Methodist Church in Brandon.

Mississippi Top 50 is an annual list of the people who are judged to be the most influential leaders in the state.  This bipartisan selection of leaders comes from the ranks of elected and appointed officials, economic development professionals, business, media and government affairs.  The awards are sponsored by Entergy Mississippi and Mississippi Farm Bureau and awardees were nominated through an open process.