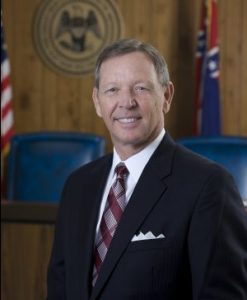 A sixth generation Mississippian, Mark Formby was raised on a small cattle farm near Picayune. Now he’s charged with helping people get back to work as Chairman of the state’s Workers’ Compensation Commission.

Formby graduated from Picayune Memorial High School and attended Pearl River Community College before receiving his bachelor’s degree from Mississippi State University. After college he returned home where he has been in private business for over thirty-five years. He has been active with numerous civic and volunteer organizations and served as state president of the Mississippi Jaycees and National Vice President of the United States Junior Chamber of Commerce.

From 1987 to 1990, he served on the Washington, D.C. Staff of United States Senator Trent Lott as his economic development and small business legislative assistant and then returned to picayune to serve as executive director of the chamber of commerce. Mark Formby served six terms in the Mississippi House of Representatives before his appointment as Chairman of the Workers’ Compensation Commission.

He was recognized as one of the top five “pro-economic development” legislators 23 years in a row and was member of the committees on Insurance, Energy, Marine Resources, Education, and Ways and Means Committees. Mark served as Chairman of both the Insurance and Rules Committees.

In addition to his duties as a commissioner, Mark owns Formby Realty in Picayune, where he is still active in community service and serves as a deacon and Sunday school teacher.