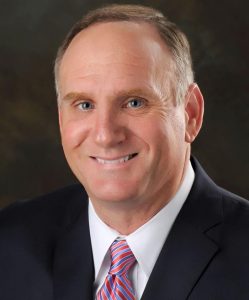 Mark Baker has ascended to the senior leadership circle in the Mississippi House. And in 2019, he’s attempting to parlay his reputation as the tough Judiciary A Chairman into a credible run to be the next Attorney General.

Mark graduated from the University of Memphis in 1984 and Mississippi College School of Law in 1987. He has been an active member of the Mississippi Bar ever since and currently engages in private law practice in Brandon.

Representative Baker was first elected to the Mississippi House of Representatives in 2004, representing District 74 which currently includes parts of Rankin County and which previously also included parts of Madison County. As Republican Leader from 2007-2011, he coordinated the recruitment, fundraising and campaign efforts which led to a Republican majority in the Mississippi House of Representatives in 2012 for the first time in modern history. Representative Baker is Chairman of the House Judiciary En Banc and Judiciary A Committees and is a member of the Appropriations, Banking and Finance, Transportation and Investigate State Offices Committees.