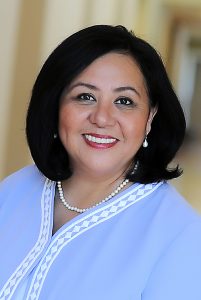 Leading over 10,000 members on over 35,000 acres stretching across ten different counties, Phyliss Anderson is charged with the financial and educational well-being of her people.

A native of the Red Water community, she serves as Tribal Chief of the Mississippi Band of Choctaw Indians. Chief Anderson was officially sworn in as the first woman chief in Choctaw history in 2011. She is currently serving her second term in office.

Chief Anderson, fluent in the Choctaw language, has more than 30 years of experience with tribal government management. In 2003, she was elected to serve as a tribal council representative for her home community. While seated as a representative she served in the position of Secretary-Treasurer for the Tribe. Over the years she has shown a strong commitment to financial responsibility; operating an accountable and transparent government; and building the quality of life on the reservation.

Chief Anderson has been featured in numerous national publications as a rising leader in the Southeast and in Indian Country. She has been honored and recognized with various awards and accolades including the Mississippi Commission on the Status on Women “Woman of the Year” award in the Political/State and Local Government category, Mississippi Business Journal’s Top 50 Leading Business Women, the Mississippi Trailblazer “Sam Haskell Spirit of America” and “Inspire” award, The Meridian Star’s Citizen of the Year, East Central Community College Alumnus of the Year 2016, Indian Health Services Nashville Area Director’s Award for Excellence and honorary membership in Delta Kappa Gamma, education sorority. Chief Anderson also is the recipient of a Presidential Citation from Jackson State University. In 2011, Chief Anderson also had the distinct honor to introduce U.S. President Barack Obama at the 3rd Annual Tribal Nations Conference in Washington, D.C. Most recently, President Obama appointed Chief Anderson to serve on the National Advisory Council on Indian Education.

Chief Anderson draws on a wide variety of experience. She is a graduate of East Central Community College in Decatur, Miss. She has served on a number of governing boards and committees for multi-million dollar enterprises including those in the tribal manufacturing, tribal government contracting, and the gaming and hospitality industry.