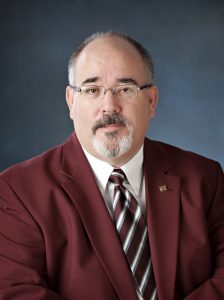 Mississippians have known Sid Salter in a variety of capacities. Newspaperman, syndicated columnist, radio host, author and now as the Chief Communications Officer and Director of the Office of Public Affairs at Mississippi State University.
In that role, he is the leading voice of the “Bulldog Nation” and leads a team of marketing and communications professionals in producing print, broadcast, and new media content designed to advance MSU’s reputation as a nationally prominent research university.

Salter is also the university’s spokesman and the administrator of both the University Television Center and campus radio station WMSV-FM.  He is a member of the Miss. Press Association’s Hall of Fame, and his syndicated political columns have been published continuously in Mississippi and a number of national newspapers since 1983. Salter represents MSU on the board of directors of the University Press of Mississippi and serves on the Southeastern Conference Communicators Executive Committee. He also serves as vice president of the Pushmataha Area Council, Boy Scouts of America.

In 2011, Salter wrote the highly-successful biography of legendary MSU broadcaster Jack Cristil, which funded MSU’s Jacob S. “Jack” Cristil Endowed Scholarship. Salter is a member of the board of directors and chairman of the audit committee of Community Bancshares of Mississippi, Inc., a multi-bank holding company operating as Community Bank in Mississippi, Alabama, Tennessee and Florida. He is also a member of the board of directors of the G.V. “Sonny” Montgomery Foundation.