William Winter, Former Governor of the State of Mississippi 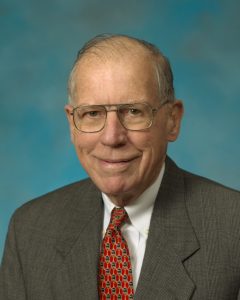 Governor William Winter’s legacy in Mississippi will forever be tied to positive outcomes on racial reconciliation and educational advancement.

Born in 1923 in Grenada, he grew up in a family that highly valued education.  His mother, a teacher, taught him in a one-room school through the second grade.  He then attended and graduated from Grenada High School.  After his graduation from Ole Miss in 1943, he served three years in the infantry in World War II emerging as a captain.

After his military service, he returned to Mississippi and graduated from law school at Ole Miss.  While still in law school he was elected to the Mississippi legislature in 1947.  He was subsequently re-elected twice to that seat.  In 1956, he became the Tax Collector for the State of Mississippi. He was subsequently elected to the offices of State Treasurer and Lieutenant Governor.  He was elected Governor in 1979.

His tenure in the Governor’s office from 1980-1984 was marked by the passage of the landmark Education Reform Act of 1982.  Winter barnstormed the state generating support for the Act and in a special session of the legislature ultimately secured its passage.  This put in place drastically needed educational improvements and funding as well as the installation of kindergarten in public schools statewide.

Since serving as Governor, he has been a tireless advocate for racial reconciliation in Mississippi and is nationally recognized for that work.  He has received a number of awards recognizing those efforts including the John F. Kennedy Profile in Courage Award, the Martin Luther King Jr., Memorial Award, the National Civil Rights Museum Freedom Award, and he has been honored by the naming of the William F. Winter Archives and History Building in Jackson.  He is also the driving force and namesake of the William Winter Institute for Racial Reconciliation at Ole Miss.     He has also received honorary degrees from Millsaps College, Tougaloo College, Mississippi University for Women, William Carey University, Mississippi College School of Law, Davidson College, Troy State University, the University of North Carolina at Chapel Hill, and Mississippi State University.

He currently serves as Special Counsel in the Jones Walker law firm in Jackson.

He is married to the former Elise Varner of Senatobia, and they have three daughters, five grandchildren and four great grandchildren.

Governor Winter is a treasure to the state of Mississippi and his legacy in public service and advocacy for racial reconciliation will continue to be felt for years to come.