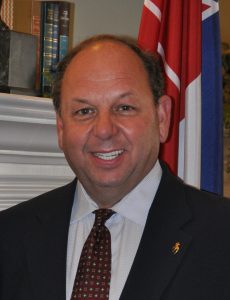 Steve Holland is an institution in Northeast Mississippi, and he never met a soundbite he didn’t like. Whether you know him as Representative Holland, Undertaker Holland or just plain ‘ol Holland, he has been a political force in the Mississippi House for over three decades. He’s been described as “obstinate, profane, compassionate, intelligent and crazy like a fox.”

Steve was born in Tupelo in 1955, and is a lifelong Lee County resident with wide ranging interests in community and church affairs, state and regional politics, business and agriculture. He was first elected a member of the Mississippi House in 1983, representing the people in House District 16 of Lee County for 34 consecutive legislative sessions. He served as chairman of the House Public Health and Human Services Committee for 8 years and for 24 years, he chaired the Medicaid/Health Care Appropriations Subcommittee.

Rep. Holland has a reputation among House colleagues of being an effective, hard working legislator. He has been especially active in legislation to promote health-care, agriculture, build highways, improve public education, strengthen the community colleges, upgrade mental health programs, and boost economic growth. He served from 1988-2004 as Chairman of the House Agriculture Committee and helped to push through many programs that have served to enhance Mississippi agricultural products.

He also serves on the Appropriations Committee, Medicaid Committee; Transportation Committee; Banks and Banking and Fees and Salaries Committee. He is former chairman of the Agriculture and Natural Resources Committee of the Southern Legislative Conference, and has served on a number of special study committees in his long career. Rep. Holland also participated in the prestigious Toll Fellows Program sponsored by The Council of State Governments in Lexington, Kentucky, in 2003.

He authored and helped pass a bill which built the North Mississippi State Mental Hospital in Tupelo, subsequently named after him by the State Department of Mental Health. The agency’s Steve Holland Group Homes opened in Nettleton on Steve Holland Drive in May 2006.

Rep. Holland has received numerous awards for his work in the Legislature. These include the Golden Torch Award by the Mississippi Council on Aging and the Spirit of Inspiration Award from the Mississippi Health Care Association. He has received several awards for leadership on behalf of conservation programs around the state, was a recipient of the Farm Bureau’s annual “Friend of Agriculture Award” in 1993, and the Future Farmers of America Honorary State and American Farmer Award. IN 2008, he received the highest award given by the March Of Dimes Organization, the Franklin D. Roosevelt Award. In 2009, he received the G.I.V.E. award from the Commission on Volunteer Service for his commitment to public service, as well as the Billy Thames Public Service Award from the Mental Health Association for his efforts impacting the care and treatment of thousands of Mississippians who struggle with mental illness every year. On March 1, 2010 he received the Legislative Leadership Award from the Mississippi Nurses Association for his guidance in benefiting the profession of Nursing.

He is a 1977 Business Administration graduate of Mississippi State University and has an Associate of Arts in Mortuary Science from Northwest Mississippi Junior College. He also has done graduate work at George Washington University in Washington, DC and received a Masters of Arts in Southern Studies at the University of Mississippi. He is owner/president of Holland Funeral Directors in Tupelo, Okolona and Nettleton and has farming interests in Lee and Monroe counties.

In the 1970’s Holland served for nearly three years as an aide to the late Mississippi First District Congressman Jamie Whitten in Washington, and later worked as political director on Senator Thad Cochran’s staff, based in Jackson.

He is a member of the Mississippi Democratic Party, Mississippi Historical Society, and Mississippi State University and University of Mississippi Alumni Associations. He is a 32nd Degree K.C.C.H. Scottish Rite Mason and Shriner and a member of the Civitan Club and several local, state and national boards including the Regional Rehabilitation Center for over 35 years where he now serves as president, the Sanctuary Hospice House Board, and the Tombigbee Electric Power Association Board of Directors. He is a member and attends the First United Methodist Church in Tupelo and is pianist at the Unity Presbyterian Church east of Plantersville.

Steve is married to the former Gloria Temple, was the Mayor of Plantersville for twelve years. They have four grown children four grandchildren. Steve’s mother, Judge Sadie Holland, was Lee Counties first female Justice Court Judge and the first lady Mayor of Nettleton and his eldest brother, Billy Joe Holland, is a member of the Lee County Board of Supervisors. His late father, J. C. Holland, was president of the Lee County Board of Education during the tumultuous 1960’s.