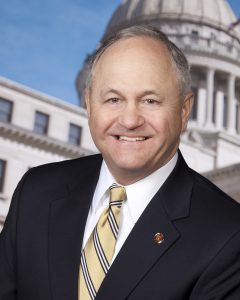 A native of Hollandale, Senate Appropriations Chair Buck Clarke is in the middle of the late session madness when budgets are made in the Mississippi Legislature.  One wouldn’t normally think that one of the most powerful Republicans in the state would hail from the heart of the second congressional district, but Buck Clarke has consistently found a way to do it.  A CPA by trade, Clarke became Senate Appropriations Chair after the late-Alan Nunnelee ascended to the Mississippi First Congressional seat in 2011.

Clarke is known throughout the Capitol for rarely having a cross word.  As one of Lieutenant Governor’s top committee chairman, Buck has the unenviable task to trying to fill almost unlimited wants with very limited resources.  But to his credit, during his tenure as one of the key leaders of the appropriations process, Clarke has helped guide the legislature to fully fund the state’s Rainy Day Fund for several years early in his tenure, and that has most assuredly come in handy as revenue collections have dragged in 2015 and 2016.

Again, in 2016, all eyes will be in on Clarke and his team as challenges from a sluggish national economy and rising healthcare costs and educational wants get factored into Mississippi’s complicated budgeting process.